What is sound design?

Sound design is a term commonly used in film, television, advertising, radio, gaming, App development and other forms of digital media, but also exists in the realms of live performance, theatre, sound art and much more.

The auditory element of a production can give an audience subtle clues about plot, help to identify and develop characters, set the pace, indicate a location, heighten or diminish realism, set the mood, or profoundly change the way an audience feels about something or someone.

If there is one thing experienced directors, astute production companies and clever creative agencies have in common, it is the fact that they all know exactly how important music and sound design are to the success of their productions. The wrong soundtrack can destroy a production.

On the other hand, having the right soundtrack, more than just “enhances the vision”, and can be a key player in storytelling.

Although the term ‘sound designer’ can literally refer to someone employed to create custom sound effects, sound design can also be used as a broader term encompassing the locating, creating, manipulating and blending of audio elements from Foley through to sound libraries, music, and even dialogue and associated ADR. In the best case, there is the time and budget for this to take place as an experimental process alongside production all the way from pre-production through to post.

With the encouragement and support of a creative team that truly understands its importance, sound design can shape the picture as much as the picture shapes the sound, creating a consistent soundtrack that utilises the expressive possibilities of the medium, whatever that happens to be.

Jingles, sound logos and idents, are simple, instantly attractive and infinitely adaptable forms of sound branding that have been successfully selling products and reinforcing brands since the start of commercial radio in the US in the early 1920s.

With the advent of television, the ability to mix sound, music and language with images, colour and movement created an even more powerful memory bond.

With significantly less time to evoke a feeling than say in feature films or television programs, these short, catchy, musical numbers rely on simple, often repetitive melodies or ‘hooks’ that are designed quite intentionally to get stuck in your head and be placed on repeat. This involuntarily memory response is why people sometimes refer to the hooks inside jingles as ‘earworms’.

How many times have you caught yourself humming the tune to a piece of advertising music? You get the idea.

Technology and the home recording movement

Now more than ever before, composers and sound designers have access to high quality, inexpensive musical and digital recording equipment, making the production of broadcast-quality tracks from home an achievable task.

With powerful and affordable computers, software, microphones, pro-audio gear, acoustic panelling, even online educational tools in music and sound production, barriers to entry for the modern day composer and audio professional are decreasing by the day.

The fact is professional, broadcast-quality music and sound design jobs that were once the exclusive domain of multi-million dollar recording facilities, are being completed more and more from comfortable boutique studios, often located in residential areas, in real homes, all around the world.

A lot of these boutique home studios are fitted out with professional, highly sophisticated audio equipment that far exceeds the quality and technical capabilities of many small to mid-range commercial studios operating in the early 2000s. Many of these small to mid-range studios have in fact since been squeezed out of the market, most likely due to this increase in competition.

Simply put, the availability and affordability of quality, digital technology has empowered the creative individual, democratising the industry, changing the game forever.

Getting heard in the 21st century

In parallel with the accessibility of affordable digital technology, competition has intensified in the music business, making it increasingly difficult to make a living from original music and creative sound. Many artists will agree that gaining real exposure and finding paid opportunities in the music industry has become as much of a challenge as producing the tracks themselves.

Emerging composers with dreams of entering the commercial music space or music synchronisation industries such as film, television and gaming must push extraordinarily hard to make a name for themselves over the next decade.

As well as traditional means, through the clever combination of social media, online promotional tools and distribution services, there are still many ways in which composers and sound professionals can break down the proverbial door. However, it’s important to remember that, like always, it’s all about the music and the sound. If you’ve got that right, it is simply a matter of tenacity, patience, and maybe just a dash of being in the right place at the right time. 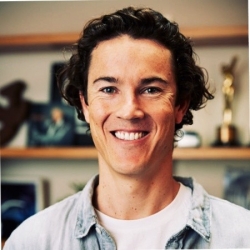 Evan Buist
Managing Director at Melodie
As a composer, engineer and sound designer Evan Buist has worked with brands such as Paramount Pictures, Universal, National Geographic Channels. In this article, Evan shares his insights on how sound can make an impact
He is now the founder & MD of independent production music platform Melodie (www.melod.ie). Supporting an international roster of composers and representing an extensive catalogue of high-quality production music.

Want to join the discussion?
Feel free to contribute!